A few months back, July 11th, to be specific, I had just arrived home from a day of Project Based Learning training. Mostly because of a summer full of basketball camps, involuntary vacations, and teacher trainings, I hadn't had much of a break. I sat down on my bed, locked my door to the outside world and just wanted to "veg-out." As an avid sports fan, it was also a horrible time to be looking for sports, as it was a night of regular season baseball or probably some international curling championship. Naturally, my remote landed on the SyFy channel. It was the premiere of Sharknado.

I recently, in class, likened the beauty found in Gothic literature to my personal imitation of the Fresh Prince of Bel-Air doing the running man, and the decaying buildings in Detroit (These are all beautiful in their descent into destruction). I would also throw Sharknado into that category. Sharknado, for those who haven't heard of it (and if you haven't, then I would suggest selling the rock you've been living under and upgrading your humble abode) is a made for television B-grade disaster movie about a waterspout, or hurricane of sorts, that lifts sharks out of the ocean and deposits them in downtown Los Angeles. Starring the ever impressive Tara Reid, and my favorite 90210 star Ian Zeiring, this movie captured America as, according to NBC Universal, the show averaged 5,000 tweets per minute throughout the show. Now, it is important to understand that most of these tweets ranged from:

However, amidst all of these responses, There were a few others that looked like this:

Throughout a personal viewing of this movie, I found myself jumping between the two thoughts of "How in the world is someone making money with this movie?" to "How ingenious is it that someone is making money with this movie?" There obviously can be a literary theoretical/philosophical debate about how culturally the binaries are flipping into a world where "bad is good" and masculinity now equals this; however that is not where I am going.

My point is, that often times out of obvious bad ideas, can come some pretty amazing things.

Again, I have detailed that my classes are working on their 20% time projects. I ran into a few problems. Despite my hope that all of my students knew exactly what they would do if given their freedom, as it turns out, this isn't entirely true. With that being said, I needed some ideas to help them come up with ideas.

I came across the Sharknado of brainstorming tactics. Using an idea I stole from Kevin Brookhouser which he stole from Karl Lindgren-Streicher, I decided to implement the Bad Idea Factory. What this is, in a nutshell, my students took the vast majority of en entire 50 minute class period, where they came up with the worst ideas possible for their projects. Bear in mind, I am teaching at a public high school and working with Juniors and Seniors. There were some bad ideas, and there were some "Bad" ideas. There were literally thousands of bad ideas. Here are some of the things they came up with: 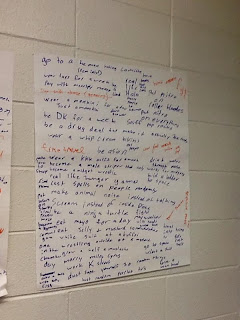 This is just a sample of what was described. The crazy thing about this activity is that within the bad ideas, came some pretty amazing things.

One group saw the idea of making a Zombie Board Game, and has decided to run with that. They are now learning the process of making board games and have now set up a time to meet with a game developer to find out how to pitch their ideas. I will post a link to their blog as things begin to develop.

Another student was dead set on writing a love song to a refrigerator.  After presenting this in the bad idea factory, his peers laughed. When he presented it to the class as his actual idea, they voted him down. When he presented it a second time with a deeper description, most everyone, myself included thought exactly what Greg Berlanti said about Sharknado: "Why didn't I think of that?"

This student presented to the class that he had always struggled with his weight. He felt the root of his struggles came from self esteem issues and feeling comfort in what was found in the fridge. To combat this he was planning on learning to play the guitar to improve his self confidence. In return he would like to write a satirical love song in which he eventually breaks up with his refrigerator. He plans to post this song, when completed, on youtube and I have no doubt in my mind that this video will soon go viral. The process that this student is going through, as he documents it, is impressive and what he is learning about (song structure, poetry, research on how to play a guitar and even writing letters to one of his guitar idols) is more work than I would have ever imagined seeing out of this great kid.

Now, this is how it worked:

At the beginning of class, I strategically divided my class up into groups. I use playing cards to do this as they walk in. This allows me to divide up based on numbers, colors, suits and a whole slew of different ways; this renders students trying to trade the cards to get their friends in their groups ineffective. As they got in their groups, I set up a competition, to come up with the most ideas, whether bad or good, as possible. No idea could be rejected. I joked with them and said that there was "no such thing as a dumb idea, only a dumb person." They laughed, but got the idea. I gave them a large sticky sheet and a few markers. i gave them a 30 minute timer and wandered around. At the 30 minute break, I had my students take their ipads and do a gallery walk. They had 10 minutes to go around, enjoy the crazy ideas, and then record on evernote 5 ideas that could be turned into good 20 time projects.

I gave them 3 thinking questions:
1. Could this idea be completely flipped and made into something positive?
2. With the right audience, could this be a good idea?
3. Could this idea in some way benefit another person?

To say this was my most enjoyable teaching experience of the year would be a bit of an understatement. My kids had fun, came up with some great (and not so great) ideas and were able to get a better grasp on what they could do for their projects.

I am really happy that we live in a world of Sharknados, and now its sequel Sharknado 2: The Second One, which will be coming out in July this upcoming year. I understand that this may not be an apt comparison, but I recall the reception of J.M. Barrie's presentation of the beloved Peter Pan. People thought he was crazy to be writing a play about kids who flew to a far away land with fairies, pirates, Indian braves and a hero who never grew up. Likewise, many turned down J.K. Rowling's initial idea of a boarding school for teenage witches and wizards. Without a few initial bad ideas, we may not ever get to something substantive.