If we look hard enough, there are lessons about educational philosophy everywhere. One such place just happens to be the mind of famous cartoonist Gary Larson, author of The Far Side. His comic strip is at once irreverent, deep, and outrageously funny. And stock for points to ponder as we approach yet another school year.

There is an ages old activity that takes place in many classrooms across the country called Forced Association. Over a series of posts, we will use that strategy and examine a few of Larson's cartoons and discuss the themes, morals, and allusions contained therein.

Without further ado, here is installment No. 1 of Lessons in Education, featuring Gary Larson: 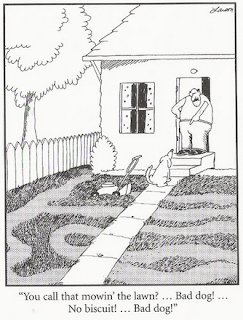 On the surface, this single frame comic tells the tale of a dog who puts in a subpar effort mowing his master's front lawn. While we find humor in the man ridiculously scolding his dog for a poor lawncare performance, if we stop to ponder its significance we find even more ironic laughter.

After all, if our dog could start the mower and exhibit success in pushing it across the grass, would we not be overly ecstatic? With a little training, Fido could be trained to produce finely manicured lawns all around town, pulling in a boatload of extra income. Not to mention the appearances on Oprah. And the reality TV show. And the book tour. And the blockbuster mov...

Oh, sorry, I got off track there. Back to Fido and the lesson he can teach us about education (or any other venture, for that matter).

Under similar circumstances, what would we prefer the man say to his adventurous dog so obviously full of initiative? (My dog never even offers to lift a finger to help. He just lifts a leg to cause more yardwork for me.)

To put it into an educational perspective, what do we say to a child who was willing to take a risk and try something new, but turned in a mistake-ridden product? Do we scold him and take away recess? Or, even more likely, do we assign a poor score, mark, or grade to him and make no bones about how awful the effort was compared to his peers?

The notion that all students must perform at or near the same levels in order to be "proficient" or "advanced" is a popular one in contemporary education. While I do not fully condemn the philosophy of having benchmarks for kids, I am also a human being who understands that not all students will excel at the same concepts and skills at the same time or in the same way. As much as we may say otherwise, I'm afraid that too many of us are still in the same data-measuring boat.

W. Timothy Gallwey, in his book entitled The Inner Game of Tennis, explains it this way:

"But who said that I am to be measured by how well I do things? In fact, who said that I should be measured at all? Who indeed? What is required to disengage oneself from this trap is a clear knowledge that the value of a human being cannot be measured by performance-or by any other arbitrary measurement. Like Jonathan L. Seagull, are we not an immeasurable energy in the process of manifesting, by degrees, an unlimited potential? Is this not so of every human and perhaps every life form? If so, it doesn't really make sense to measure ourselves in comparison with other immeasurable beings. In fact, we are what we are; we are not how well we happen to perform at a given moment. The grade on a report card may measure an ability in arithmetic, but it doesn't measure the person's value."

I contend that with any educational outpouring, whether it be technology implementation, Common Core Standards instruction, or standards based testing - to name just a few - we too often overlook the fact that our kids can do amazing things, even as they fall short of the arbitrary mark set for them by people who have and will never meet them.

Just as the dog in the comic should be praised for his willingness to take on something new, despite the "poor" outcome (based on whose standards, exactly??) our students must receive the same treatment for stepping beyond the usual.

Educators talk a big game about differentiation, student exploration, and creativity. But do we walk the walk when it comes to lavishing praise on those students who actually put themselves "out there" with a new idea, product, or action - no matter what the result? (The same lesson is true of so many school leaders who squash a teacher's willingness to try to be innovative, all in the interest of "classroom management" or "standards-based instruction.")

It is widely accepted that schools kill creativity in even our brightest youth because we are too busy telling them to mow the grass in nice straight rows, so to speak.

Gallwey sums it up nicely with this golden nugget from his book:

"...I see tennis players every day trying hard to correct their "faulty" games, and they learn at a much slower rate than the player who places his confidence in whatever potential is already within him and then lets it happen."

Remember these words the next time your dog does this:

Would we condemn or praise a student or teacher who takes an educational risk? #edreform #Education #edchat pic.twitter.com/gmwXHDETPA
— Darin Anderson (@coachdarin22) July 30, 2015