In the latest installment of our comical series, we will explore the concept of idea exploration in schools. Let's just hope that no one gets hurt in the process. ;-) 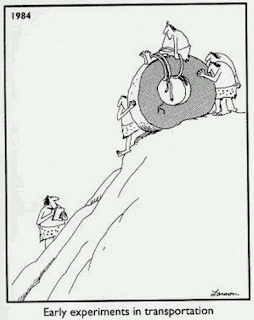 Among other things, Gary Larson is noted for using prehistoric figures to represent modern kinds of thinking. In this comic, we see a group of neanderthals exhibiting modern scientific principles (note the clipboard-holding caveman near the bottom) by conducting a controlled experiment.

What we also have before us is a comedic look at the sheer idiocy of tying a living being to the outside of a rock wheel.

Whether or not he has studied science, modern man understands the basic principles of physics, through experience mostly, and knows what is about to happen to the unsuspecting man...and so we laugh. (Granted, it shows how demented we can be as a society, but that is another story for another day.)

Looking at the paragraph above, which is the most important word to you? Science? Physics? Demented?

I contend that the single most important term is "Experience."

Now, look back at Larson's creation and ask yourself this question:

Is it not true that the only reason we find humor in this comic is because these men do not have the background knowledge necessary to see an otherwise obvious tragic ending?

We are laughing at them because they do not know what we know. In that light, maybe it is not as funny anymore.

When put into educational terms, how many of our students walk into class knowing as much as WE know? How many of them have had the same depth of experiences as WE have had? The younger they are the less likely it is that they are aware of much of the content they learn about.

Schools often claim that they allow their students free range of exploration and experimentation - that they are free to make mistakes because that's how we learn. But then they are effectively held hostage by mandated testing that does not honor them for experimenting with the 4 answer choices. No standardized assessment that I know of allows students to make a choice, determine that it was the wrong option, and be able to go back and try again.

Or even worse, school and classroom environments create situations where risk takers and trendsetters are laughed at when they fail. Or ridiculed for trying to be "better" than their peers. Or told that being excellent makes others feel bad. Their experiences are controlled, to a certain extent.

Under similar environments would the airplane exist? Indeed, no one makes fun of the Wright Brothers for crashing plane after plane because society now takes advantage of their ultimate triumph everyday all over the world. We are grateful for their experiences and what their failures amounted to in the long run.

What about the kinds of technology we use on a daily basis? Would we all be pulling out our smartphones and strapping on wearable devices if developers around the world were given one single shot to create the touchscreen interface?


The trouble is that legislation and funding and school accreditation are all tied to some extent or another on static, one-shot assessments.

However, not all aspects of education revolve around standardized test scores. That which we do not control, we cannot change. So what can we do?

With educational technology, and many other teaching tools and strategies, we can create environments that foster creativity and exploration and that encourage experimentation. All of these serve to give our kids experience. Here are just a few ideas:
After Grog gets mowed over by the stone wheel, instead of laughing at him or scolding his cohorts for a poor product and their "what-on-earth-were-you-thinking?" moment, we must revisit the occurrence in terms of what it would look like in the classroom.

Aside from stopping Grog and his buddies before they hurt someone, we should be praising the initiative and ingenuity of the group as it tries something new, or something more revolutionary that has never been done, if that's the case. All of these mini moments - micro-experiences let's call them - add up to create authentic macro-experiences that make a huge difference in the lives of our students.