Technology and Entitlement: A Recipe for Success?

Life is not to be graded like a standardized test, as is evidenced by the kinds of opportunities available to some but out of reach for others.

Malcolm Gladwell, in his book Outliers: The Story of Success, puts forth the theory that people do not attain success in spite of their circumstances, but because of them. For every inspiring rags to riches story that we hear, there are thousands more success stories that are nowhere close to folklore.

The fact is, Gladwell claims, talent and ability notwithstanding, most successful people simply took advantage of the fortuitous bounces that came their way, while their less unlucky counterparts were left behind. Superior intelligence, for example, is less a factor in one's ultimate success than is where they were born and what advantages were proffered to them.

The son of a farmer in rural Kansas and the Doctor's son from Los Angeles may well have equal intellect and ability, but the two will have vastly different opportunities that will shape them and help determine where they end up.

Or so the theory goes...

While there is much truth in that line of thinking, there is also a much more level playing field in the world today, as each and every one of us strives for our own brand of success. And it is thanks, in large part, due to technology.

To help put this in perspective, in Outliers Gladwell writes about the characteristics of a typical middle-class upbringing:

"The heavily scheduled middle class child is exposed to constantly shifting set of experiences. She learns teamwork and how to cope in highly structured settings. She is taught how to interact comfortably with adults, and to speak up when she needs to. ...the middle-class children learn a sense of 'entitlement'."

Even as Gladwell admits that the word "entitlement" carries with it a negative connotation, in its truest definition it actually makes sense. As humans we are all entitled to certain unalienable rights, among those being the ability to acquire information and to learn, 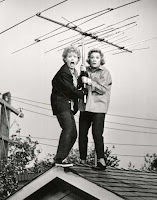 The gift of technology has allowed all of us, where able, to reap the full rewards of entitlement. Let me illustrate my idea with this example: I was born and raised in a small farming community in Idaho. While I was no stranger to knowledge - I had access to all the books I would ever want to read - my opportunities were limited compared to those my same age who grew up in more urban areas. For several years, we received our newspaper two days after printing. And since we had only two TV stations via our rooftop antenna, I never knew who won Sunday NFL games until the Tuesday after.

Now, with the marvels of ever-advancing technology, such a scenario is rather unheard of. Since that time in the 1980s we have evolved from catching NFL scores and highlights on cable TV programs, to anytime access via the Internet, to now being able to watch live games on mobile devices from wherever we are.

Simply stated, we are now in a culture where we feel entitled to getting whatever information and content we want at the touch of a screen. We don't even need the proverbial button anymore!

If I want to learn how to fix my wife's kitchen mixer, I look it up on YouTube (true story). Similarly, if a kid wants to play guitar or put her hair up in a crazy new braid, there are unlimited resources online to help her do so. If by chance there is not a YouTube tutorial, there are literally millions of discussion threads out there full of all kinds of advice and suggestions. Honestly, at least as far as popular culture goes, there is not an original question out there. By and large, we do not have to wait for our inquiries to be addressed.

However, it is not all good. There are two sides to this tale of entitlement:

1. Access to knowledge has long been the cure to abolishing ignorance, which has been and still is the fodder for tyranny. Ask Hitler or Stalin if they would have liked the Internet in the hands of their citizens.

2. Immediate access to knowledge creates a generation of lazy, me-first citizenry who will grow accustomed to having their brains filled with little to no effort of their own.

These two different roads can and do run simultaneously. What's more, they often intersect with one another, sometimes several times on any given day.

This is where we can make significant and meaningful differences as teachers of our emerging and curious students. We can show them how to navigate the two diverging and converging roads to best make use of the talents and abilities they have. We can help inspire them to pursue their greatness while also teaching them to temper their desires and take purposeful baby steps.

Technology offers our young people opportunities that we could never have imagined even a decade ago. Here are a few examples of what technology can do for our kids as they practice their cultural entitlement to knowledge:

All recipes must follow a specific order with predetermined amounts of ingredients. Success with technology and entitlement is no different. As Gladwell puts it, we are, to a large degree, products of our environment. Rather than squandering our fortuitous circumstances, we must take full advantage of what we've been given.

Growing up in a world with so much technological ease is a perfect scenario for success for our students. They just may not know how to put the ingredients together correctly.

Are we helping them?