In Part II of our comical series on education reform, we examine two different ideas of education in need of some reform. Oh, and ducks...there will be lots of ducks. 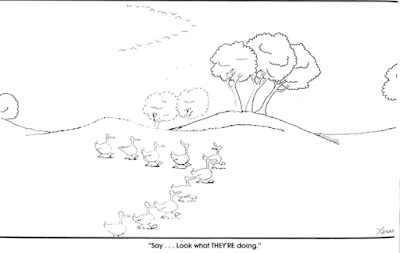 Like most of Gary Larson's The Far Side comics, this particular frame offers both a superficial humor as well as a deeper, more philosophical meaning. In this post, I will offer my thoughts on both levels of understanding as they relate to education reform - or altering behavior in any aspect of our lives.

The initial humor is found is the obvious fact that ducks fly, but for some reason or another, this particular brace (look it up) has not yet lifted its wings to the air, so to speak.

Here, Bugs Bunny offers up a cruel bit of irony, at least where Daffy Duck is concerned. In order to save himself from disaster, all the duck has to do is flap his wings, or take advantage of his natural abilities. But he doesn't.

So too, we laugh at the blatant irony of the lead duck looking up at his peers with the sudden epiphany that they too could fly. In educational terms, it is similar to a student (or teacher) who observes his own peers completing any certain action and then thinks, I can do that too. Before long they are simply soaring.

Sometimes all it takes to leverage change is for an interested party - often it is an impressionable child or teenager, but it can be an adult as well - to closely observe the behavior of others and then mimic it. While it is not always that simple in actuality, many behaviors (movements, actions, procedures) can be reproduced on the basis of mental images  - let's call them mind-made movies - alone.

In his book entitled The Inner Game of Tennis, tennis pro Timothy Gallwey speaks of the battle between Self 1, our mind and ego, and Self 2, the part inside of us all that knows what to do if not interrupted by the conscious brain.

Gallwey explains his theory in the context of a tennis lesson he once gave:

"My next lesson that day was with a beginner named Paul who had never held a racket. I was determined to show him how to play using as few instructions as possible; I'd try to keep his mind uncluttered and see if it made a difference. So I started by telling Paul I was trying something new. I was going to skip entirely my usual explanations to beginning players about the proper grip, stroke and footwork for the basic forehand.

"Instead, I was going to hit ten forehands myself, and I wanted him to watch carefully, not thinking about what I was doing, but simply trying to grasp a visual image of the forehand. He was to repeat the image in his mind several times and then just let his body imitate. After I had hit ten forehands, Paul imagined himself doing the same. Then, as I put the racket into his hand, sliding it into the correct grip, he said to me, "I noticed that the first thing you did was to move your feet." I replied with a noncommittal grunt and asked him to let his body imitate the forehand as well as it could.

"He dropped the ball, took a perfect backswing, swung forward, racket level, and with natural fluidity ended the swing at shoulder height, perfect for his first attempt! But wait, his feet; they hadn't moved an inch from the perfect ready position he had assumed before taking his racket back. They were nailed to the court. I pointed to them, and Paul said, "Oh yeah, I forgot about them!" The one element of the stroke Paul had tried to remember was the one thing he didn't do! Everything else had been absorbed and reproduced without a word being uttered or an instruction being given!"

Most of us self-identify as being visual learners, and this anecdote fully supports that idea. Our students and teaching peers can and do learn so much by closely watching those around them. I imagine that these ducks will be joining their brethren in the sky in no time...as long as no one intercedes and tells them they cannot or should not be doing so. Or worse yet, over-instructs to the point of confusion and discontent between Self 1 and Self 2.

Gallwey put it this way:


"...it is the constant "thinking" activity of Self 1, the ego-mind, which causes interference with the natural doing processes of Self 2. Harmony between the two selves exists when the mind itself is quiet. Only when the mind is still is one's peak performance reached."

While I do not know if anyone told these ducks to walk south instead of fly, it appears that their minds were indeed getting in the way. The old adage, "Spread your wings and fly," is more truth than fiction, at least in a philosophical sense.

How many children enter Kindergarten having been told over and over to not do this or to stop doing that? And once they gain entrance to the school walls do they not still hear the same tone on a daily basis?

If a child wants to experiment with something new, whether it is a new piece of technology or simply a new way of completing a task, is she honestly given the freedom to do so? Educators preach ingenuity and creativity, but how many of us are actually willing to not just lighten up on the reigns, but to take off the halter all together?

Furthermore, how willing are we as educators to model the same kind of behavior by integrating something new into our respective classrooms? Technology. Behavior Management. Student Engagement.

If you think of the flying V formation as a peer you respect and admire - and yourself as a ground-bound duck - does it seem silly to you to NOT try and reach for higher climes? Of course we would make an attempt.

The capacity to excel exists in all of us  - even as most of us will never become as talented as Serena Williams or Roger Federer are at tennis. We do not all have to be given teacher-of-the-year awards to be considered great. But like hitting 9 out of 10 balls in the court is amazing, so to is believing in the children we teach.

You can learn a lot from a duck. #EdTech #EdChat #EdReform (Stay tuned for the next @edtechmaniacs post.) pic.twitter.com/fa9DIFTpFb
— Darin Anderson (@coachdarin22) July 31, 2015